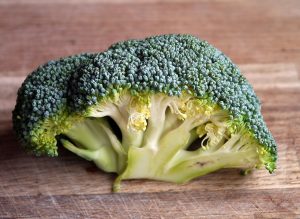 I was asked by my good friend Sandra if I had a healthy version of a cream of broccoli soup. It took me a while to respond to her because I had to make one at home to be sure I was giving the proper ingredients and direction. I am an ingredient “tosser” and seldom follow recipes for soups… A traditional cream of broccoli soup would require butter, cream and potatoes. I swapped with avocado oil, organic sour cream and 1% milk. Eliminating the starchy vegetable provides a bit of wiggle room for those who count points and calories. I like the use of good oil and organic dairy as they each add a bit more nutrition to this soup. It is a complete meal in one bowl. If you prefer not to add dairy, you may consider adding a creamy substitute of your own such as silken tofu but it does change the flavour profile and I would recommend using a non GMO tofu. But that is my opinion and not meant to dictate what foods you like to include in your personal diet.

So while I was waiting for my squash to roast yesterday, I made this soup using the «romanesco» thingy I got in my farmer’s basket. I hear it is a cross between a cauliflower and a broccoli but my twisted mind gave me a visual of one of those pointy, bad ass bras Madonna used to wear on stage way back in the 80’s! Ok, weirdness aside, the romanesco is actually a very pretty vegetable: it is a beautiful shade of lime green with very intricate pattern of 3D triangular shaped florets. I munched on a few raw pieces and I thought it was even better than cauliflower. I should have taken a picture but I was too busy singing «Like a Virgin» at the top of my lungs! Well anyhow, since I already mentioned in my previous post that I was making this soup while my squash was roasting, I thought it would be no more than fair to throw in the recipe. Maybe the romanesco version should be renaimed La Isla Bonita Soup hahaha…

Cream of Broccoli (or cauliflower or romanesco)

2-3 leeks, white and light green parts only. (Leeks can be gigantic so this is roughly 2 cups of chopped leeks)

8 cups of vegetable broth: the trick is to use a very flavourful broth. Avoid low sodium commercial broths (if you can)

This soup freezes well. If you keep it fairly thick, you can also toss it with pasta, vegetables, fresh tarragon, even cooked chicken for a healthier mock «alfredo» sauce