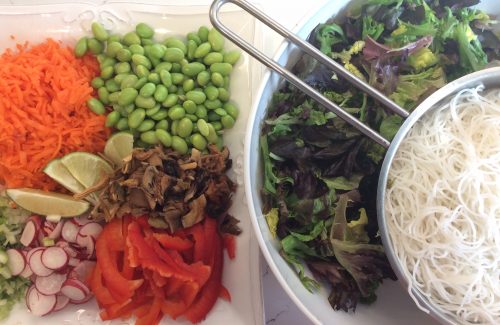 If I were a purist, I would tell you that this salad is far from an authentic Vietnamese or Thai noodle salad. I would tell you that we, North Americans, tend to «Americanize» everything and that in the end, foods from other cultures served here are a pale comparison of the original ethnic dish at the source of inspiration. And if I was a purist, I would tell you that recipes like the one I am about to share do not respect the culture and flavour profile of the real deal rice noodle. I would even go as far as to say that we are imposters and we should show more respect to the authentic cuisines of the world… I mean, which Italian hasn’t chuckled in front of a plate of Italian Spaghetti and Meatballs on this side of the pond? How many French have wrinkled their nose at the site of a plate of escargots à l’ail smothered in mozzarella? I myself cannot stand the use of the name «poutine» when shredded cheese is used instead of cheese curds because that is how it is done in Quebec: only with cheese curds and hand cut fries can poutine be called poutine! Only then, it is really authentic and worthy of its name!!!

So recently, I have taken the time to reflect on this so-called bastardization of ethnic dishes and wonder if it is such a terrible thing after all… I have read articles that shame Moo Shoo Pork lovers (guilty: I adore Moo Shoo Pork), stating that this simile Chinese concoction is not even remotely close to the real heritage dishes of China. Those articles snub our love affair with foods that have been introduced under the name of another country’s culinary culture but when in fact, they have most surely been tweaked for good reasons: lack of readily available ethnic products, lack of authentic methods & tools, lack of technique training and entering a market that may be tentative to new tastes, flavours and sometimes “off the wall” ingredients. But other than using cultural names in vain to present these dishes and maybe unwillingly insulting the real “McCoy”, these counterfeit ethnic offerings may have done the Epi-Curious world an extreme favour.

Over decades, if not centuries, immigrants (and traveller’s alike) have brought their culinary art and tastes of their home country wherever they have set their roots. Conquistadors have managed to influence the cuisines of the colonies in order to bring some comfort in an otherwise very foreign land. Even our own food heritage gets tweaked with time: recipes passed down from generation to generation often get a bit of a facelift or are adapted to the taste of the hour… Ingredients availabilities and food brand names change, diets demand new adaptation and taste preferences dictate the need for variations.

Take for example the famous Vietnamese sandwich Bành Mì: how «authentically Vietnamese» would anyone consider liver pâté and baguette? However, culturally, Bành Mì is THE sandwich of Vietnam; its creation influenced by French colonization. I believe culinary influences from around the globe bring a wonderful array of flavours into our worlds. They make culinary explorations a lot of fun and give us permission to explore and play with ingredients that are unfamiliar. They make us dream of faraway lands and help us connect to humanity… While we adapt our foods to our needs, our regions and taste buds, it doesn’t mean that we disrespect the original recipe or the culture’s influence. On the contrary, it permits to open our edible concoction profile to infinite possibilities! I personally think this is really amazing… But out of respect to the purists out there, I present my Vermicelli Rice Noodle Salad without adding any culture/country influenced name. Let’s just say that this one is an Ottawa-prepared but Vietnam-inspired fusion salad! It is cool, refreshing and perfect for our city’s climate which is often plagued by thick, very hot and very humid summer temperature. Hmmm, I hear this Ottawa weather can resemble that of Vietnam tropical forest… I may be offering more authenticity than I thought… Nahhh, I think it would be too far a stretch to call my salad «Vietnamese Noodle Salad» just because we share a humid summer climate lol!!! I will stick to my original title. 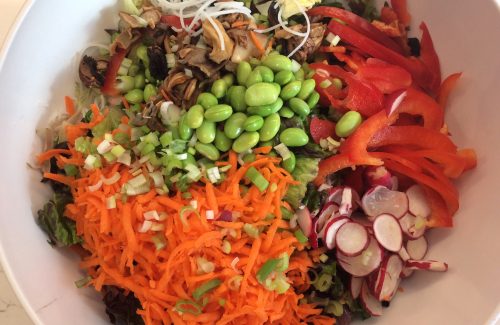 I literally tossed this one together using bits and pieces of fresh veggies left over from other meals… I managed to make enough salad to serve as a meal for 2 and a generous portion left over to bring for lunch. The vegetable proportions are approximate and you can certainly add you own variations with what you have on hand. In my case, I hand a handful of radishes, one half a red pepper, a couple of green onions and left over ready chopped cilantro as well as few more items including chopped lettuce. I am sure the dish would have been uplifted a notch had I had lemongrass, cucumbers and Thai basil: I will certainly keep that in mind for the next time. And since I always keep a bag of very fine rice vermicelli in my pantry, tossing this one together was extremely easy and quick… Making your own dressing adds such a depth of flavour to any salad however, if you are pressed for time or lacking ingredients, commercially prepared Asian dressings such as sesame or miso dressings will work wonderfully.

In a shakeable container such as a Mason jar (I use recycled glass jars from store-bought dressings), with the exception of the oils, add all the ingredients and shake until well blended. Add the oils and shake again. This dressing will keep several weeks in the fridge.

¹ – I prefer Tamari or Japanese soya sauces because I find them lighter and less salty. I purchase organic soya sauces whenever I can
² – By choice, I now only use organic oils that have been pressed using cold extraction. Neutral oils, regardless of your food sources and convictions include: canola, grapeseed, sunflower, peanut and corn. I would not recommend olive oil with this recipe.
For the salad: (all vegetable portions are approximate)

Vermicelli rice noodles are super easy to cook. Simply soak them in a large bowl with boiling water until tender, anywhere between 5 to 10 minutes. I start checking the noodles after 5 minutes soaking time. Rinse under cold running water until completely cool and set aside to drain until all the other ingredients are ready. While the noodles are soaking, you can also reconstitute the dry mushrooms by soaking in hot tap water. They will roughly take the same amount of time to soften as the noodles. I like to use frozen organic edamame: they only take 3 minutes to cook in boiling water. Rinse until cool and set aside.
Assembly:

This is the easiest part: leaving the lime wedges and cilantro, toss everything else together in a large bowl. Add salad dressing to taste and blend well. To properly balance the flavours according to the quantity of noodles and vegetables in this particular recipe, I used half the salad dressing which means I have the other half all ready to go for another time!
Sprinkle with fresh cilantro and serve with lime wedges.
N.B. If you plan on saving some for lunch (or another meal), portion that meal BEFORE adding the dressing. Otherwise, most of your vegetables will get soggy… 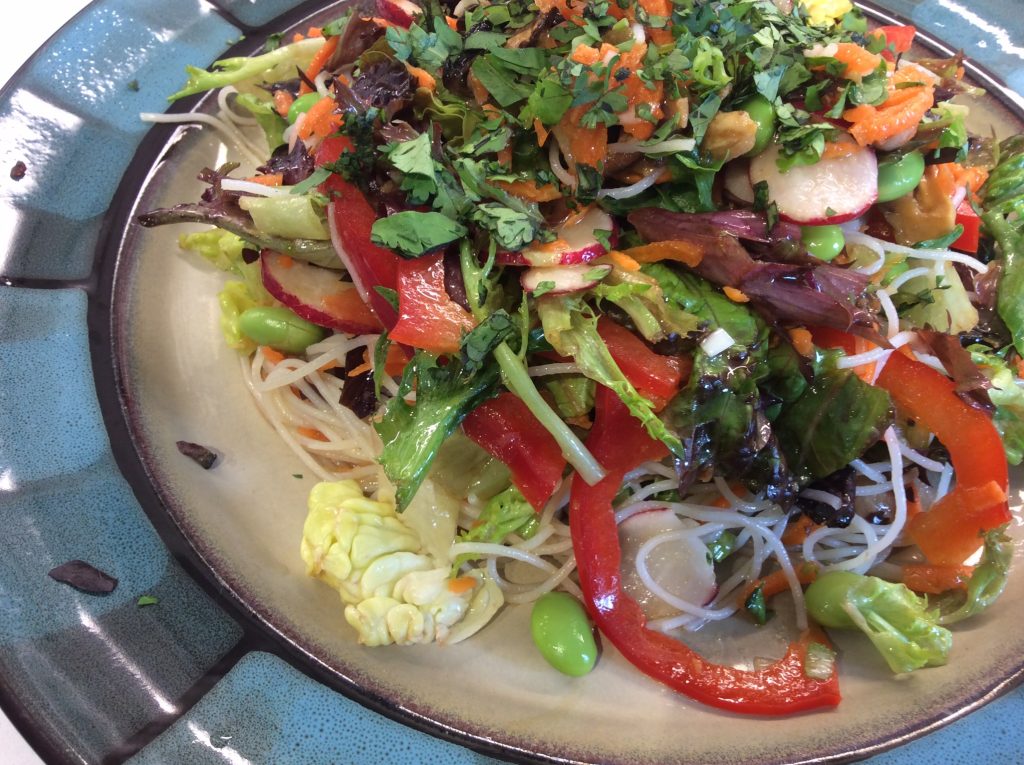