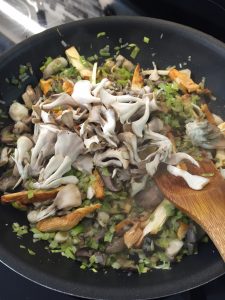 Seems a recent photo of mushrooms piled high in a skillet while making a little leek and wild mushroom appy made many salivate after I shared it on Instagram and Facebook! I have received a few requests for the recipe… Normally, and if I hope to share or blog a recipe, I plan a little better, taking proper measurements and jotting everything down as I go. I turn on the OCD part of my personality. Hence the reason why I do not post recipes as often as I wish… This was not one of those times… It was more like letting loose and allowing all the unchained creativity flow right out of me like I often do. I find I use recipes more as a source of inspiration as opposed to following them to a T unless the recipe calls for a new technique, is about baking, taps onto a food group or recipes I am unfamiliar with or originate from other cultures and countries than my own. One of my favourite things to do is scan my fridge and pantry at the end of the grocery cycle and whip up something using what I have on hand. Some work beautifully and if I am in that mood, I will jot down the recipe for later use. Some concoctions turn out «Meh» but are good enough to feed the fam without anyone gagging too much. Ok, slight exaggeration here but I can honestly say that once in a blue moon, some meals bomb right out… Yup, even in my home LOL! You know you didn’t nail it when left overs linger in the fridge until they become science experiments.

This «feuilleté de poireaux et champignons sauvages» is exactly the type of food I can whip up directly from brain to plate without measuring anything. It is such a classic French inspired preparation… I must have watched my mom make something similar many times over the course of my life. Anything in puff pastry becomes a gourmet dish right??? And unless someone doesn’t like mushrooms, this one in particular is always a crowd pleaser. French restaurants and Bistros often offer something or another “en croûte”, “napoléon” or “feuilleté” to the delight of the diners. Since I “ad lib” this once from start to finish, I am sharing with you only in approximation ingredients measurements with the general order of prep but I warn you, this recipe is not precise. Now I have the utmost confidence in everyone and I am SURE most of you have enough kitchen skills to figure it out. I have added several photos which offer a pretty good idea of overall the quantities of each ingredient.

The Shrooms are in town!!! I selected an assortment of wild mushrooms since most are in season right now. You could make this using good old white button mushrooms as well. I also splurged on crème fraîche which is easy enough to find: Liberty™ makes one but if you can find an organic one, it is well worth the extra few $$$. No crème fraîche, no worries: heavy cream or whipping cream will do as well. This is NOT a calorie reduced appy. It is meant to be rich and sinfully delicious. You can substitute for low-fat everything but it won’t be the same.

What you will need: 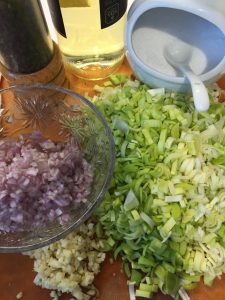 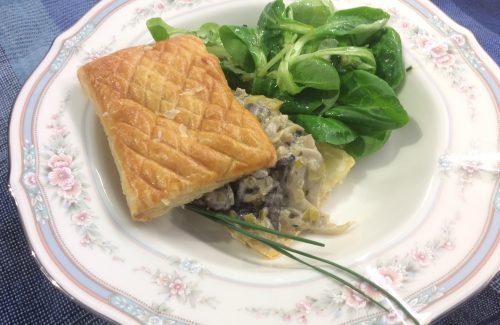 Tips:
Puff pastry shells: make ahead and keep in a metal baking dish topped with foil. Slide into the oven until ready to serve. It will keep the humidity out. Reheat at 200°F 15 minutes before serving
Slide your plates in the oven at the same time: warm plates are a nice bonus for this type of appetizer.