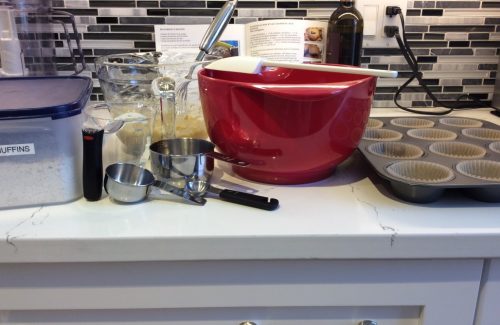 Although spring is really pushing through these days with the snow melting and the birds singing mighty glory to the morning, the wet drizzly stuff that is hanging over our heads call for more warm and hearty foods no? This post is about a bunch of stuff: recipes by others that I tried, visits to our local food providers, exploring new tools, tips on this and that…  It’s really about a simple, joyful and ordinary moments in my little world.

I was playing in the kitchen this past weekend (as I normally do since it seems obvious I really have nothing better to do in life than to cook, read about cooking, dream about cooking and write on Facebook &  in my blog about cooking), trying to maximize the use of my pantry items before going grocery shopping. There were ripe bananas on the counter and fresh walnuts I wanted to use up but I was out of milk, yogurt and buttermilk. All I had on hand was half a tub of sour cream: could this work?  I swaped the buttermilk for the exact same measurement of sour cream in my Banana Chocolate Chip muffins and  it sure did work!!! Crispy tops and moist, tender centers, just like we love them. Experiment succesful, yay! 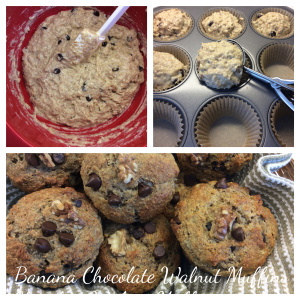 Last Sunday was one of those epic early spring days where the sun is warm and the breeze is gentle. The King and I, our tummies full of warm muffins and strong coffee, grabbed our shopping cart and set out to the Byward Market by foot.  It was too glorious a day to pass by… We were not alone in seizing spring: many cafés, restaurants and bars had their patios opened. The world in downtown Ottawa was happy! After much debate on where to grab a bite to eat, we enjoyed a lovely Vietnamese lunch at Saigon on Clarence Street (no website) before doing our usual food store rounds. Our regular stops included: The Byward Fruit Market, The House of Cheese, Le Moulin de Provence (best sourdough bread), Your Corner Butcher, Continental Delicatessen and the Market Organics. There are a lot of other shops we like, such as La Bottega, but the above are our go-to main food suppliers. We took our time, enjoying the sun and doing a bit of people watching  before returning home several hours later with over 8.5km on our trackers. Blissful day 🙂

After such a long walk, Sunday dinner was kept simple as I wasn’t looking for anything requiring too much prep time. Nothing fancy yet über comforting: roasted chicken (lemon, honey, rosemary, garlic) with mashed potatoes, roasted carrots, roasted spaghetti squash, pan gravy and coleslaw. Yup, you have guessed it, we are huge fans of roasted everything! Throw in a little  glass of vino and voilà! A perfect Sunday dinner!

Monday was a vacation day for me; I decided it was time to discover the many possibilities my pressure cooker has to offer. I purchased this tool last summer for the sole purpose of helping with my canning projects.  I had not yet taken the time to further explore its various cooking features. It offers a lot more than I actually thought: it can slow cook as well as pressure cook, it can cook rice, it can actually sear meat and it can steam vegetables. Pretty cool if you ask me! There are even Facebook groups dedicated to the joy of owning a pressure cooker! It was high time I did more with it than seal summer crops in jars right? Pressure cooking promises to cook  in record time and it delivered: I ended up making a braised Asian pork shoulder with cabbage and potatoes in about 1 hour plus a bit more for minimal prep time the recipe required. I adapted a slow cooker recipe by Ricardo to use the Pressure Cooker instead: I had to tweak the cook time since I was going from super slow to super fast. Although I made a few rookie errors such as adding the potatoes and cabbage in a little too early, the finished product was delicious. The recipe’s flavours were bang on. I will probably try this one again, maybe in my slow cooker this time just to compare the results:  Ricardo’s Pork and Cabbage Stew

Continuing on the Ricardo love fest bandwagon, I made his slow cooker milk rice pudding from his book: Ricardo’s Slow Cooker and this dish also turned out great. Two for two Mr. Ricardo Larrivée!  Although I did add my own footprint by throwing in raisins and cinnamon which I think brought it up a notch. All the recipes I have tried from this book on slow cooking have been successful. I find slow cooking a lot more complex than I ever imagined: the right proportion of liquid and aromatics to meat/legumes/vegetables definitely impacts the end results. I have been left more often than none with watered down bland meals in the past…  Ricardo’s book has become my «go to» resource when I feel like trying something new in the slow cooker. What a crazy day this turned to be with both my slow cooker and pressure cooker going at the same time!

My cooking day didn’t end there:  a huge batch of comfy beef vegetable soup was concocted using ground beef, a rich beef stock made a while back and the last jar of homemade tomato juice from last August canning extravaganza. The soup started with the usual trinity: onions, celery and carrots to which were added zucchinis & red peppers. The taste profile had  Italian undertones thanks to garlic, oregano and basil. But the umami of this dish was reached by adding a generous splash of balsamic and red wine vinegars as well as some sumac. To make this soup nearly stew like, a generous cup of pasta was added near the end. Sumac is new to my spice pantry;  is broadly used in Middle Eastern kitchens. It has a tart citrusy flavour which begs to be discovered and is not «hot» spicy at all. I have started adding a splash of vinegar (mostly balsamic) to soups and pasta sauces recently, after reading somewhere that it is that little secret oomph thingy that make people ask what is THAT flavour? It fills the need for the acid notes  in a recipe.

Tip on herb storage: who doesn’t love to cook with fresh herbs? Yet most spoil so quickly… My mom discovered this cool herb saving gadget that works beautifully and I bought it upon her recommendation. My mom has been my first mentor in the kitchen and still rocks our world when she cooks for us! So when she tells me something, I listen LOL! And this gadget is fantastic!!! Especially for delicate herbs. The pictures show cilantro after 6 days in the fridge and then again after 11 days in total!!! Impressive :).  I bought mine at Zone on Sussex Drive but have seen it in many kitchen emporiums. It takes very little room in the fridge when it is closed. Brand name is Prepara Kitchen Tools. This gadget is perfect for delicate herbs such as cilantro, oregano, basil, tarragon etc.  The downside is that it cannot accommodate thick bunches. And although parsley does very well in it, it is difficult to squeeze an entire bunch in the tube. 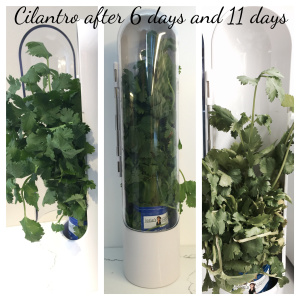 So for sturdier herbs such as parsley, I make my own mini refrigerator greenhouse. In the pictures below, the parsley on the counter is 2 weeks old. To make a herb greenhouse, all you need is a  glass jar, water and a clip of some sort. With scissors, trim the stems a bit just like you would fresh cut flowers. Keeping the bunch tied, rinse well under cold water and get rid of any spoiled bits and leaves (if any). Shake the excess water and set in the jar. Add enough water to cover the stems. Use the bag it came in to cover up leaving air in. Keep in fridge and pull branches as needed. I changed the water once and I find it amazing at how long the fresh herbs have lasted. 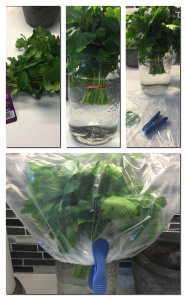 My two days of kitchen projects delivered great results:  delicious meals, snacks and a fridge full of leftovers to make the working week easier to handle! I managed to use up some pantry items before the end of their shelf life, discovered that sour cream can replace dairy in a muffin recipe and that sumac adds a wonderful citrus note to a soup. I got to explore the various uses of my pressure cooker too while trying a brand new recipe created by someone else!