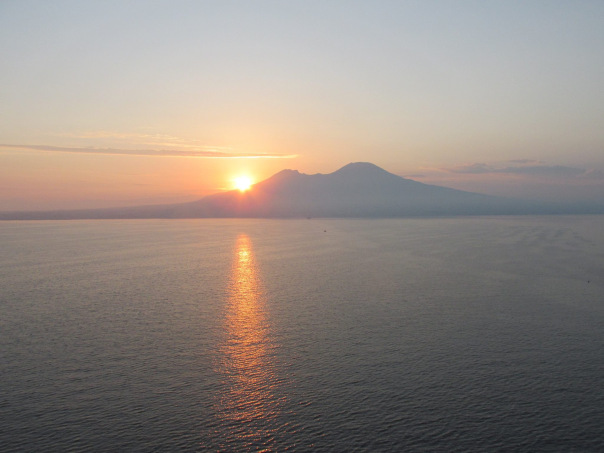 Quite frankly, the day could not have announced itself with any more majesty than it had at that particular moment! Watching the sun rise, at first peeking timidly from behind Mount Vesuvius to suddenly quickly ascend to its full early morning glory was more than I had hoped for. Wow, what a scene and hurray for the early bird that I was!  Yes, this sunrise was maybe a tad more spectacular than most I’ve had the privilege to see in my life. The simple fact that I was on a beautifully appointed cruise ship in the middle of the Mediterranean may also have played a role in the euphoric mood of the moment… I just knew this was going to be another epic day! I stood on deck for a bit as the ship slowly made its way to port, welcoming the site of Naples with the giddiness of a school girl who’s about to wear her prom dress for the first time. I needed to share this moment with my King and flew down several flights of stairs to reach my cabin, barely touching the lush carpet under my feet. I just couldn’t wait to start exploring! 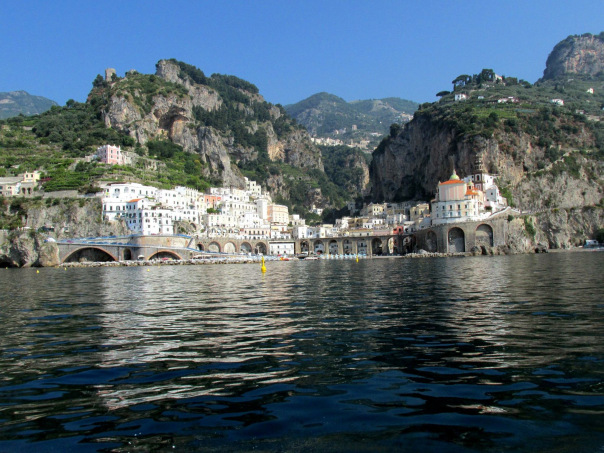 From the moment we reached Salerno, our hearts were conquered and we fell head over heels in love with the land of lemon groves… Although we reached Salerno by tour bus, we were about to discover the Amalfi Coast by water. It was… Words escape me… Even two years later, as I write this post… I feel transported in that special moment in time. You know that feeling? When you are living an epic moment that is causing  your insides to flip and flop all over in sheer joy? When you need to pinch yourself to make sure you are actually wide awake and not dreaming? Yes, it was that surreal feeling that was taking over my entire being as we bobbled along the rugged coast line under the most spectacular azure blue sky. If I could have made time stand still forever, I think it would have been right there and then. We were feeling ageless and privileged: youth exploding from our pores, our skin glowing from sun and love and contentment. 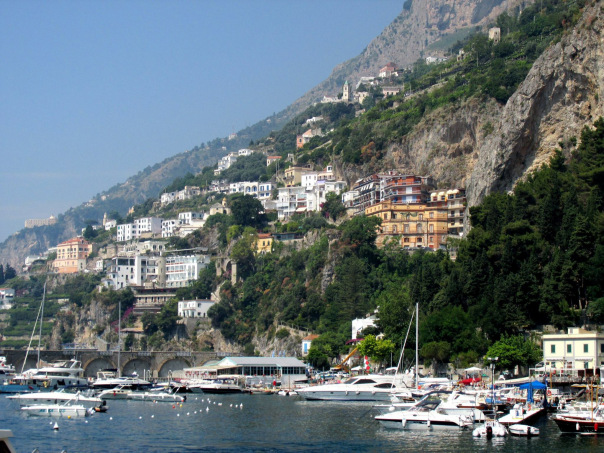 The town of Amalfi added to our awe and bliss of the moment. From the water, we had marvelled at the artfully layered terraces  of lemon trees, carved right into the rocky and steep mountain sides, the fruits so plentiful you could see them in the distance. As if an impressionist had purposely dabbed the greenery with a shower of yellow polka dots. Beyond the picturesque mosaic tiled roofs, beyond the old world charm, beyond the gazillion photo ops of weathered wooden shutters & narrow alleyways, it is the mighty lemon that stands tall and proud in this beautiful region. Amalfi oozes lemon everything: freshly picked lemons the size of oranges, lemon scented soaps, perfumes, desserts, gelato, pastries, Limoncello… Lemons are painted on canvas, on ceramic tiles, on paper… They adorned salt and pepper shakers and every possible kitsch plastic tourist souvenir from Amalfi “made in China”. Lemons, lemons, lemons everywhere. But if you must indulge in anything lemony, then nothing is more Amalfi “lemon authentic” than “delizie al limone” (lemon delight), a dome shaped dessert made of layers of genoise cake drenched in Limoncello and covered in sweet lemon cream. No one twisted our arms as we selected a prime seat at a little terrace in direct sight of the famous Amalfi church. We gleefully dug into a serving of this lovely cake, sharing an ice cold shot of Limoncello (obliged to partake, even at 10 am) and a semifreddo cafè crema, probably paying way more than we should have but not caring one iota! Our one-and-a-half-hour stop was merely a tease as we would have easily spent several days somewhere along this coast, basking in the warm sun and making our way through lemon scented menus… 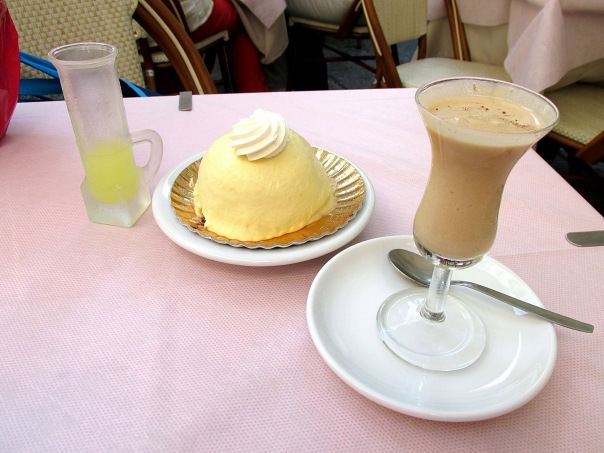 Although there are recipes online, I have not even attempted to recreate the scrumptious lemon delight cake of Amalfi. And I don’t really want to. Nope, these little creamy domes are not meant to be baked in my Canadian kitchen; they belong elsewhere. They are part of that travelling experience. I would rather visit again hoping to relive the joy of that moment, including a side of cold Limoncello and a view of mosaic tile roofs…

I am transported back to that magical place every time I grab a handful of beautiful lemons, especially when they come with a few leaves… I may not bake Amalfi Coast lemon delights but I hold my own with a few luscious lemon dessert recipes. Like these easy one pan lemon squares for instance: a shortbread crust topped with a rich and creamy lemon topping. They resemble nothing you would find in an Italian Pasticceria: they are truly a North American creation originating in the United States Midwest. According to my research, this popular dessert could very well be the brain child of the Betty Crocker™ Brand… But that is what the internet says sooooooo, may not be entirely true. Well regardless of where and when, these little squares are now hugely popular, many families handing their own recipe from generation to generation.  I find they are the perfect summer picnic/potluck/BBQ contribution because they can tolerate the lack of refrigeration for a while. They have the right balance of crunchy & creamy, tart & sweet. Refreshing too!  I have had this recipe for so long I now forget where it comes from. I wish I could give credit to the source of such wonderfulness so whoever you are, thank you!  And I love you and my family loves you and my friends love and I’m pretty sure the readers of this blog now love you too!!! 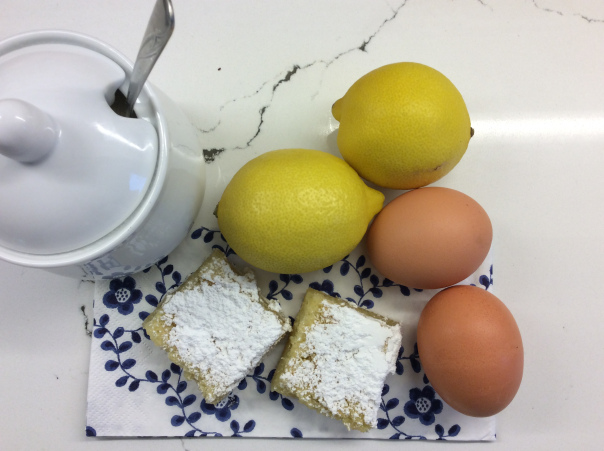 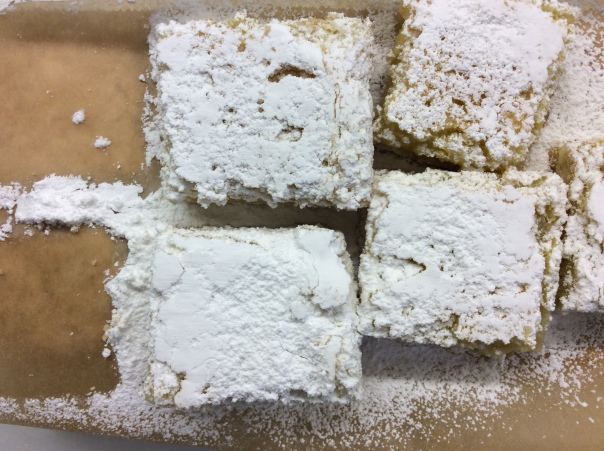 « A sincere  and heartfelt thank you!
Dining at Beckta’s – A True Celebration! »