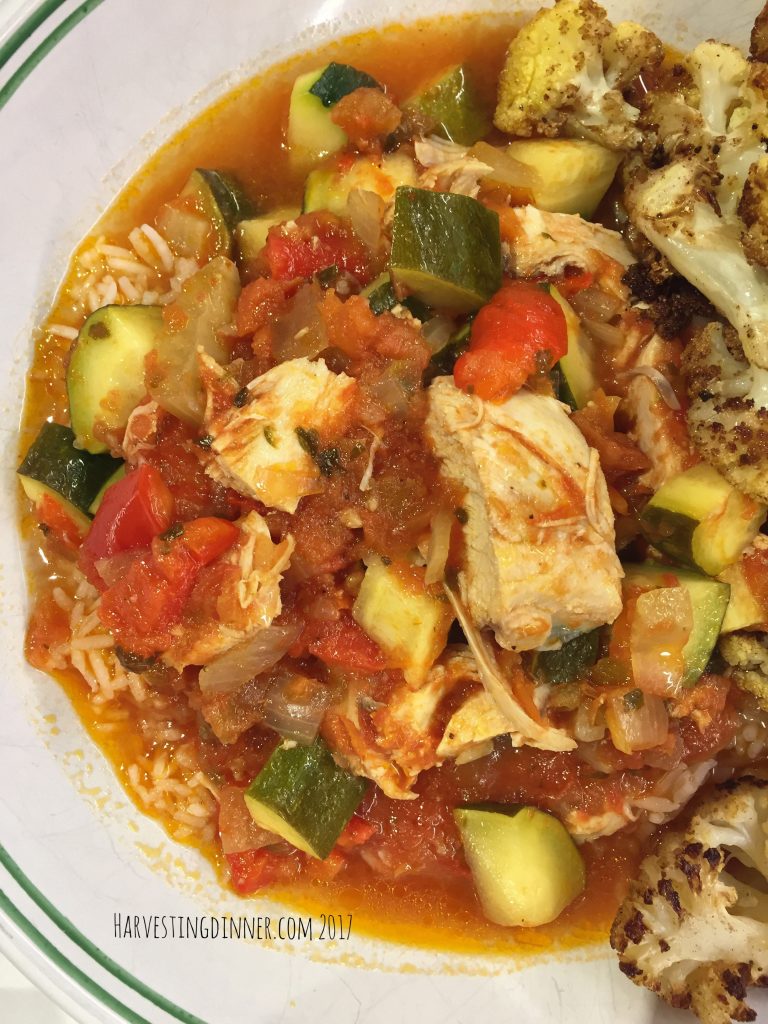 Soooo what’s up with the pressure cooker craze? These days, it seems this appliance is being showcased everywhere and on all the food related sites I follow; from Bon Appétit magazine to Cook’s Illustrated including web online food magazines. The more modern electric models have revived this «vintage» way of cooking. Here is an interesting fact: did you know that the Instant Pot was created right here in Ottawa by an ex Nortel scientist? Isn’t this cool? CBC recently posted an article on Robert Wang, the Instant Pot inventor, and you can read all about here or another in the Ottawa Citizen.

I own a Power Pressure Cooker XL™ which I acquired in the summer of 2015 to help me with some canning projects (no panic, I used it for items that would normally can well in a water bath as I fear botulism just as much as anyone else.) and purchased before knowing that an Ottawa boy had invented his own… To get acquainted with this nifty appliance, I have joined several Facebook groups that are entirely dedicated to the Instant Pot™ or the Power Pressure Cooker XL™. Some members in these groups seem, maybe a tad, borderline obsessive??? Yet, they are definitely creative!!! The hard core fans claim that not only can you cook EVERYTHING in a pressure cooker but that EVERYTHING cooks faster, is easier to make and tastes better than using other conventional methods. Well okay then! Rock on you wild and crazy pressure cooker adepts; I will never knock down creativity! Whatever floats your boat and keeps you happy in the kitchen, heck, then I say «go for it»!!! Having said that, my own personal experience offers a slightly different perspective: while pressure cookers are wonderful alternatives to cook a slew of different foods, it is not the end all of all kitchen appliances and there is still a need for conventional pots and pans. For instance, I can’t bring myself to cook hard boiled eggs using the pressure cooker method; I really see no added value and no time saving advantages whatsoever. Soups, in general, are another example of a preparation  I prefer to make on the stovetop, the old fashion way, as I find it easier (and faster) to add ingredients in layers. The time it takes to bring a pressure cooker to pressure has to be taken into account when opting for this cooking method. I think this appliance is fantastic for stews, pot roast, chicken, dry pulses (beans and lentils) and other foods that normally require a long simmer time to reach tenderness or develop flavours.

In addition to the Power Pressure Cooker XL™  I also own an old fashioned cooktop Lagostina™ pressure cooker which I have not used in decades because… Well because the King has put the living fear in me with the story of his own mother’s pressure cooker disaster: a worn out gasket blew up and literally ruined her kitchen walls and ceiling courtesy of a steaming hot geyser of soup erupting ferociously from the tiny pressure valve hole. It took her ages to clean up and as the story goes, the pressure cooker was stored away never to be used again! Now since I have absolutely no idea what a worn out rubber gasket seal is supposed to look like and prefer to err on the side of caution, I really should think of replacing mine if I ever want to confidently use it again. Another reason I have shied away from using my stove top pressure cooker is that I read somewhere onetime (can’t remember the source), that a pressure cooker should not be used on a glass-top stove. This fact has been rebutted recently while reading an item on stove-top pressure cookers so I may tempt fate and dust off my old pot (once a new gasket is securely in place). It is a beautiful pot and a gift given to me by my father on my 30th birthday. These pots do not come cheap and it is a real shame I am not putting it to good use; yet, I am still holding back… why??? Maybe because of another challenge I have experienced using my stovetop pressure cooker? Such as maintaining a constant temperature on an electric burner. The newer electric and glass top stoves tend to have heating cycles that go up and down according to elements’ surface temperature which then causes fluctuations in the pot’s inside pressure. This unstable heat source may in turn affect the overall cooking time. Because you can’t peek inside the pot while the pressure is on, you are basically cooking blind. The temperature fluctuation issue is non existent with the electric pressure cooker due to it’s controlled and programmable settings: a huge advantage this appliance has over the traditional models.

Nearly everything I have made in my electric pressure cooker has turned out well and tasty although this method proved to be more time consuming with certain dishes. For the most part, soups are one of those preparations which, in my humble opinion, take longer to make in a pressure cooker and here is why: due to the high volume of liquid, it can take up to 20 minutes to bring the first cook to pressurize which is then followed by 10 minutes cook time. It is strongly recommended to use «natural release» to let the steam out when cooking soups. Again, because of the high liquid volume, this can also take up to 20 minutes. If adding ingredients at the halfway mark, such as tender vegetables, pasta, rice and/or soft grains, the entire cycle must be repeated. Between prep, pressurizing, cooking and pressure release, it took nearly 2 hours for my last soup experiment in the pressure cooker before it was ready to serve. Having said that, I had plenty of “free” time in between each step to tend to other things (reading my e-mails, cleaning up the mess). Some may see this as an advantage but this fragmented pseudo spare time didn’t seem worthwhile to me. I felt I was «on» cook mode during the entire process. Was the soup a success? A resounding YES! Would it have been just as awesome cooked in a normal pot? Another resounding YES! And it would have been ready much, much faster.

So while your average soup may not be the thing to cook in a pressure cooker, there are exceptions: soups made with beans and or pulses would definitely benefit from pressure cooking. I see value in reducing the cook time when using such ingredients. I also see value in making stocks and broths using this method of cooking. Not having to pressure-cook-release to add ingredients would be the key factor in opting for the pressure cooker: everything goes in at the beginning and stays in for the duration of the cycle. The traditional simmer time required to either render tender beans or extract flavours out of bones and vegetables is greatly reduced when using a pressure cooker.

Now, when it comes to recipes that require a fairly long time to cook, simmer or braise for maximum flavour development, the pressure cooker  becomes a strong ally in the kitchen! For the purpose of this article, I used my electric pressure cooker two days in a row this week. While the soup seemed to take forever, on the other hand, the chicken dish I prepared was done in record time. And that is the beauty of this appliance! In one hour total in the kitchen, I was able to serve a Southwestern style chicken complete with 2 side dishes: roasted cauliflower in the oven) and rice (on the stovetop). It took about 20 minutes prep time to prepare all I needed so technically, the entire meal was cooked and served within 40 minutes. For me, there lies the true benefit of pressure cooking.

In conclusion: I enjoy working with my pressure cooker as much as I enjoy cooking on the stovetop, in a slow cooker or in the oven. It is all a matter of selecting a cooking method that is best suitable for any given recipe, the time you wish to invest and your overall kitchen gadget preferences. Cooking methods can be interchangeable or adapted according to the appliance you select. To guide me in discovering the true benefits of pressure cooking, I purchased a basic “how to” pressure cooker cookbook: Pressure Cooker Perfection by America’s Test Kitchen. I am very pleased with the wealth of information this book provides for both electric and conventional pressure cookers. Sure, I can google anything I need to know about pressure cooking yet this too can be time consuming and the sources may not always be reliable. If you are anything like me, my virtual recipes are all over the place and sometimes difficult to find. Call me old fashioned but I still favour opening a great cookbook.

I would love to hear about your adventures, successes or disasters in pressure cooking. If you own one, I invite you to try this simple, quick and flavourful Southwestern style chicken dinner. Please drop me a note with your impressions. No pressure!!! 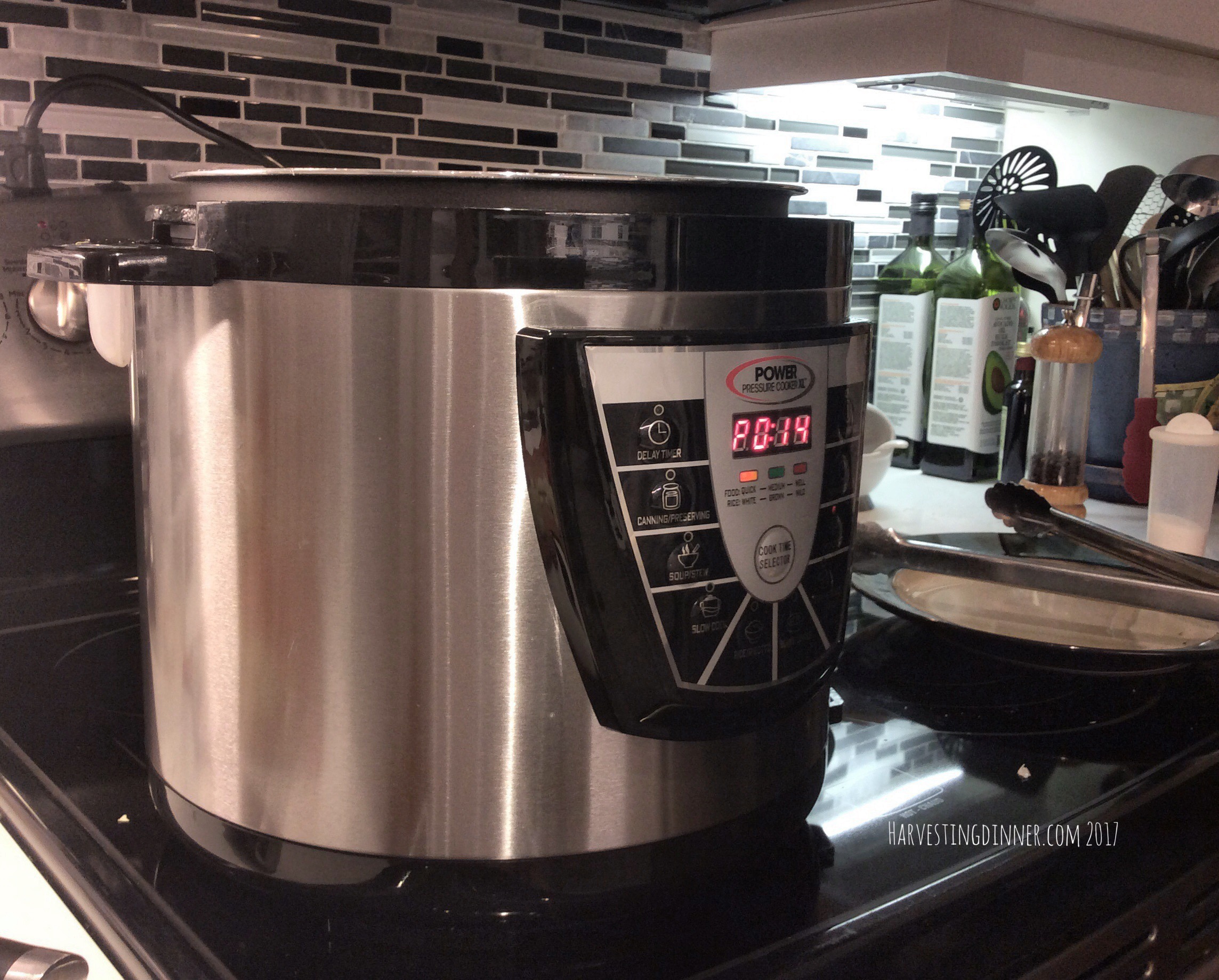 *jarred (cooked) salsa can be used but nothing beats fresh. Many grocery stores now offer fresh salsa in the produce section if you are not in the mood to make your own.

Browning the outside of meat sure does deepen the flavours. With any pressure cooker, electric or conventional, browning and pressure cooking all happen in one pot. 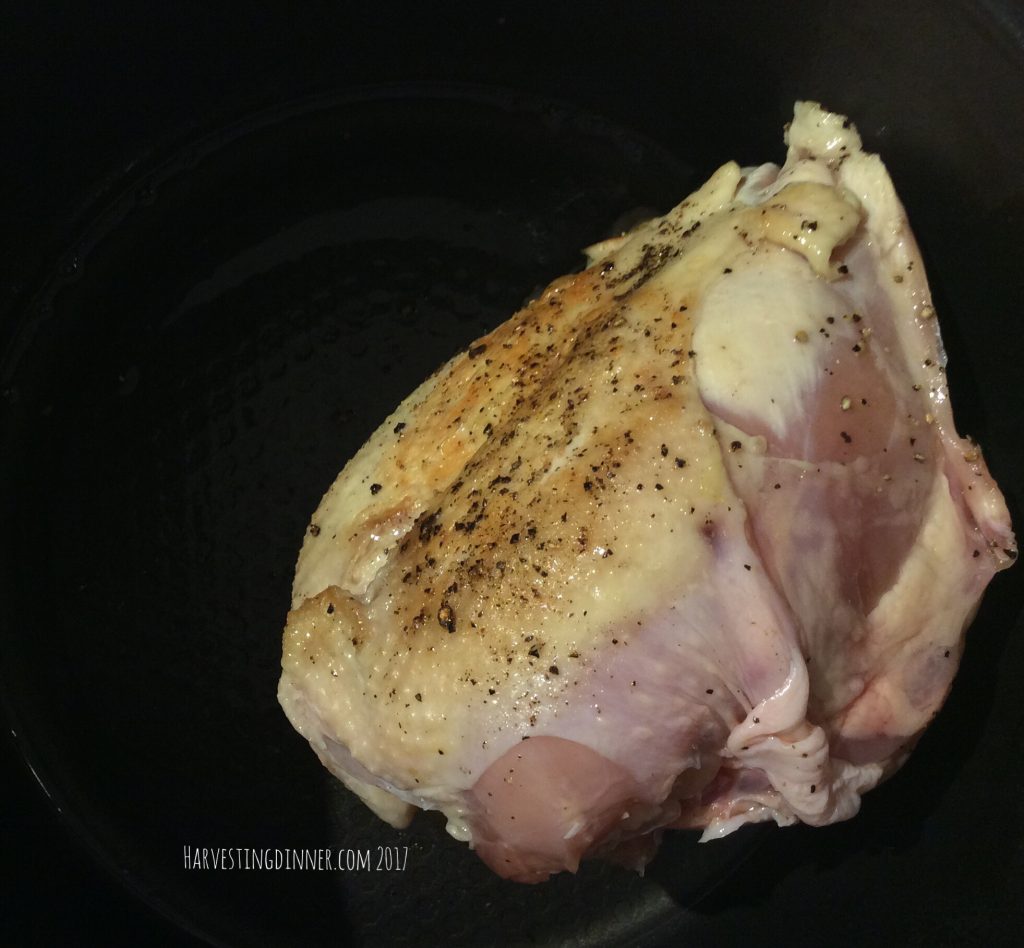